United States Homeland Security has paid a technology group almost $1 million to develop a next generation weapon, an LED Incapacitator (LEDI) for police and officials to use against rioting crowds or protesters.

It was developed to handle protesters without using bullets, pepper spray, rubber bullets or Tasers.

Bob Lieberman, president of Intelligent Optical Systems, spoke to CBS13 reporter Brandi Hitt, saying the moment the flashlight is on, it will cause disorientation. Thus, it will be easy for the police to disable rowdy protesters quickly to make an arrest or to manage a crowd.

The LEDI causes nausea, dizziness and severe headache, as Hitt learned after being exposed to a LEDI on a trial basis. She said watching this in-person is irritating and will disorient you.

Lieberman said the LEDI flashes lights at several specific frequencies. It does not let the brain get used to a pattern, so it varies the frequencies rapidly. It also gives off multiple colors and random pulses. The cumulative effect makes a person disoriented.

Lieberman said the only way to escape these effects is to:

Close your eyes, put your hand up, turn your head away, all of which will give the user the advantage they need,"

Commander Sid Hale with the L.A. County Sheriff's Department helped design the device over the last three years, and says this is something all law enforcement wants, especially at night and for crowd control, so they don't have to pull their guns.

This technology can also be extended from a gun-type device to be used in a variety of situations including in prisons to qualm riots and on vehicles to stop unruly mobs.

Others like ACLU’s Michael Soller, however, say if a user is not trained properly, the LEDI will become as lethal as Tasers, which have killed more than 300 people in the past few years according to the ACLU.

Lieberman said it will not blind a person, as it has built-in measures that prevent the light from going beyond a present threshold. Medical safety tests are already underway, and law enforcement field trials will likely start later this year.

Initially the LEDI will be available for law enforcement but later Intelligent Optical Systems may make this device available to the public. Already some are worried that it may be used by criminals.

You can see the main demonstration in a video here. The above video gives brief highlights of LEDI.

Posted by Teddy Jacobson at 8:22 AM

In recent years, a hue and cry for expanding ammunition that doesn't fragment and penetrates at least 12" in 10% ballistic gelatin has been the new beat to which high-performance ammo makers have been marching.

From Remington, we see the Golden Saber while Speer has the bonded Gold Dot line of hollow points. Winchester's law enforcement Ranger SXT line represents yet another entry as does Federal's new bonded version of the old Hydrashok.

Corbon, a maker of fast, aggressive expanding ammunition, continues with the type loads that made it famous, but has also been exploring other possibilities. First came their PowRball, a +P round in several calibers that expands massively and penetrates a bit moreDeep Penetrating X (bullet). I have seen the X bullet used with great success in rifle calibers. than the Sierra Power Jacket Hollow Points used in their traditional defensive line of ammunition. Corbon has the manufacturing rights to a relatively new bullet. It is a copper hollow point "X bullet" made by Barnes. Corbon calls this new load "DPX" for

The copper bullet used in the DPX ammo is homogeneous; in other words there is no jacket to possibly separate from the core. Copper is more malleable than typical gilding metal and less likely to break off during expansion. The copper content on the very well respected Winchester Ranger line of JHP's has a higher copper content than normal for jacketed hollow points.

Corbon offers the DPX for the .38 Special. What' more is that it is offered in a standardpressure load! The bullet has a longish profile and weighs 110 grains. 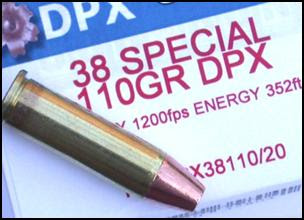 This is the 110-gr. DPX standard pressure load. It is advertised at 1200 ft/sec. A crimp is evident on the case mouth and there were no bullets that worked loose from recoil during firing.

Examining the .38 DPX cartridge, I noticed that the virgin cases are from Remington and are so head stamped. 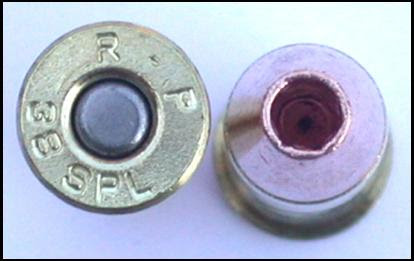 The Corbon DPX .38 Special cases are from Remington. The hollow point is massive and approximately 0.135" wide and 0.335" deep. The cartridge is longer than most 110-gr. JHP's. Copper is not as dense/heavy as lead so the bullet must be longer for the same weight.

Corbon wisely chose to offer a .38 Special round in standard pressure. Lots of +P ammunition exists for the caliber, but in light guns, some people just don't care for the snappier recoil. Others don't wish to use high-pressure ammunition in their standard-pressure-rated revolvers.

It's probably a safe bet that the majority of .38 Special revolvers being used for defense are snubs in the role of either primary or secondary weapons. For that reason, I used a 1 7/8" S&W for checking velocities, expansion, and accuracy. I then recalled that more than a few folks have mentioned liking their 3" .38's and .357's, so they might be interested in how this load might perform from their guns. Since 4" guns do defense duty in more than a few households, testing really needed to be included for that barrel length, too! 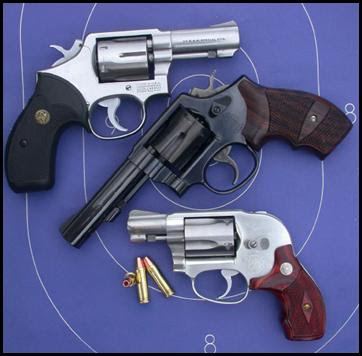 Ten shots were fired approximately ten feet from the chronograph screen for the average velocities provided in the following table. Velocities, extreme spreads, and standard deviations are in feet per second.

It is interesting to note that in these particular revolvers, the ammunition performed mostshortest barrel! Notice also that the velocity differences (average as well as high and low) are practically identical for the 3 and 4" guns. None hit the 1200 ft/sec mark, but out of the longer barrels, they were in the ballpark. consistently in the 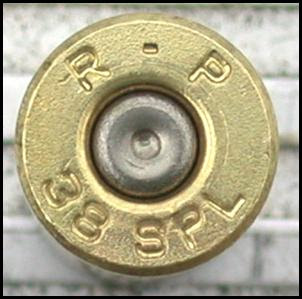 No apparent signs of excessive pressure can be seen on this fired case or primer. I could literally shake the empties from any of the revolvers without using the extractor rod.

Most defensive scenarios for private citizens are measured in feet or inches rather than yards. Nevertheless, I decided to shoot a slow-fire, double-action group at 10 yards with the Model 638. 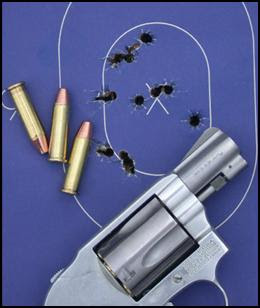 This group fired with the snub consists of two cylinder's worth of ammunition or ten shots. Notice that at both 7 and 9 O' clock the bullets hit the target at an angle. I fired another group of five shots using a Model 642 and this did not occur. Six shots were fired single-action at 15 yards using the 3" Model 64. There was no evidence of key holing and the group is more than satisfactory in size for self-protection needs. Most of us cannot shoot groups of this size at speed and under stress. Groups fired with the 4" Model 10 were practically identical. I did not shoot this ammunition farther than 15 yards today. 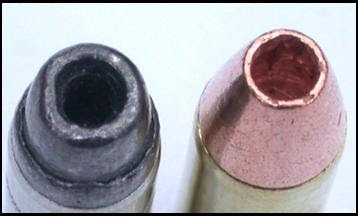 On the left is the front view of the Remington 158-gr. LSWCHP +P compared to the 110-gr. DPX. The former is my usual "carry load" in the snubs, but recoil is sharp and many do not find it pleasant. Felt recoil is subjective but to me, the DPX felt recoil is much less than the 6% reduction it shows on paper.

Recoil from the Airweight J-frame was the "greatest" of the three, but it was not bad at all. I think even a new shooter would have no problem with it. Out of the heavier all-steel guns, it was pleasant.

Corbon advertises that the DPX should meet or exceed the 12" depth desired by many when fired into ballistic gelatin whether bare or passing through 4 layers of denim. I fired several of the rounds from each gun into water.

Here's what I got: 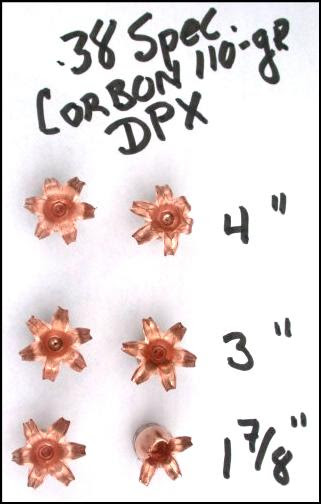 Most of the rounds looked like the "best examples" shown on the left. The single "worst example" is shown at the bottom right. It partially expanded and its recovered dimensions are 0.48 x 0.44". Most of the time recovered bullets averaged 0.67" across and were very uniform. They were also about 0.51" tall. The bullets lost essentially no weight. I didn't pull the bullets and weigh them before firing, but the recovered weights were never lower than 108 grains. Most were right at 109.

The two sideways hits on the J-frame's target were disappointing, but may be peculiar to that particular revolver. It did not happen at all with a different snub I happened to have in my pocket nor was it seen from either the 3 or 4" guns.

I see this standard pressure load as an option for those wanting a lower recoiling lightweight snub defensive load that offers both expansion and penetration. With Federal's 125-gr. standard pressure Nyclad hollow point no longer being available to the general public, DPX might be a viable option. It does offer a few more inches of penetration than the 8 to 10" generally reported from those doing ballistic gelatin tests. 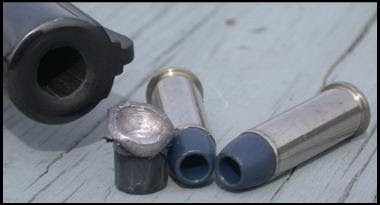 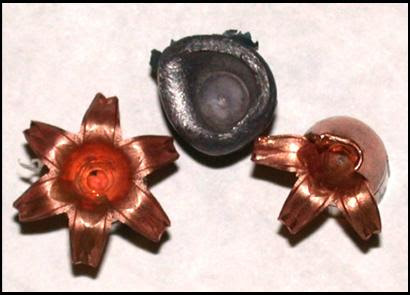 Here is the expanded 125-gr. Nyclad hollow point fired from a 4" barrel flanked by an expanded DPX (left) and the "worst" one in today's test (right). The two DPX loads were fired from a 1 7/8" barrel.

I am not privy to the engineering details at Corbon concerning the DPX, but I think if the bullet can be made a tiny bit shorter, the key holing problem will disappear. It is not an issue at all in barrels longer than 1 7/8". 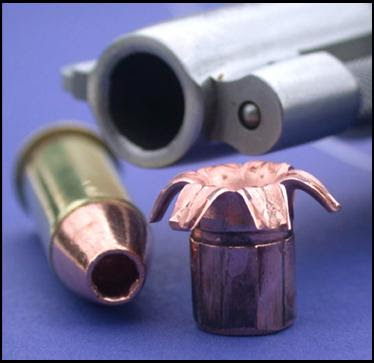 The expanded petals are tough and have sharp edges but soft enough not to be brittle. The longer overall length of the bullet contributes to its ability to penetrate deeper than if it flattened out more. So does having the gaps between the petals. This lessens the "parachute" effect of the solid wide mushroom, but still damages tissue effectively. 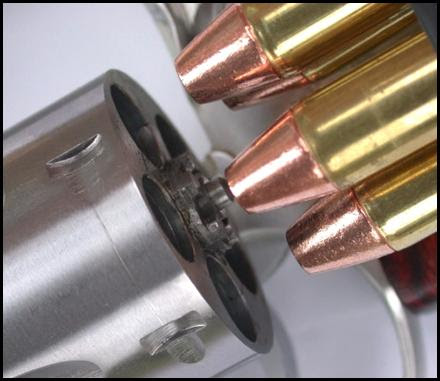 The pointed profile of the Corbon DPX made the use of a speed loader a snap. Under stress, finding the relatively large revolver chambers should be easier for shaking fingers with the smaller diameter meplat of this bullet. 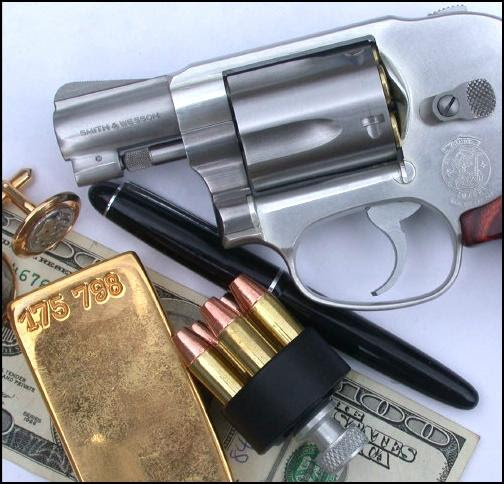 Whether by choice, official mandate, or other circumstances, the snub .38 is sometimes the choice for defending life or property. Is it the best? No, probably not, but it has the advantage of being there when needed due to its compact size and light weight.

If you or someone you know uses the .38 for "serious" purposes but have issues with recoil, this load might be worth a hard look. If you cannot or will not use +P in your revolver, this might be worth a try. Will it be replacing my usual +P carry load in my snub? The jury is out on that one. I want to see problems with stabilization have eliminated in the ammo or know that they were specific to my revolver. In a 3 or 4" barrel, I'd have no qualms about using this ammunition right now.

DO NOT DISTURB = ANOTHER ISLAMIC FIGHTER IS IN PARADISE WITH HIS REWARD OF 72 VIRGINS.

Posted by Teddy Jacobson at 8:48 AM