Visually similar to the Glaser Safety Slug, Corbon's PowRball is an entirely different round. It weighs 20-grains more, but retains the round nose profile for reliable feeding. It is a +P round and has an advertised velocity of 1475 ft/sec. 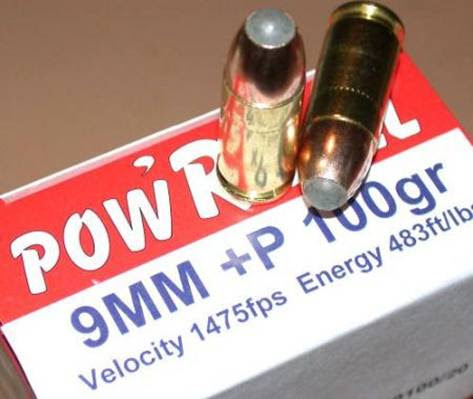 This round should feed reliably in any 9mm that will feed ball and externally is very similar to the Glaser Safety Slug. It's said to react very consistently in 10% ballistic gelatin regardless of barriers before striking the gelatin.

Using a Browning 9mm Mk III with factory barrel, I tested this round for accuracy at two distances as well as for expansion. Chronograph data is based on a 10-shot average fired 10' from the chronograph screens.

At 15 yards, I fired a group, slow-fire, to see how it would group from the Hi Power. I also fired a 5 shot group with Corbon's 125-grain +P JHP for comparison. Point of aim was the inner sphere. I also fired 5 sets of controlled pairs at 10 yards with the PowRball. Both targets are displayed. The controlled pairs were fired as quickly as I could obtain a "flash sight picture" while using a two-hand hold and Weaver stance. 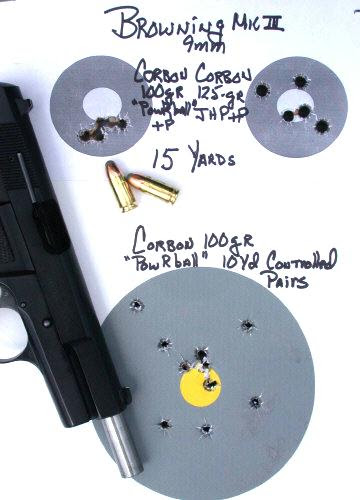 It should not necessarily be inferred that the PowRball is a better grouping load than the 125-grain Corbon JHP, although that's what happened in this instance. The spread in the latter is probably due to me, not the ammunition nor the Hi Power; it was the first group I fired. The "important" thing is to note that the PowRball at its higher velocity and lower bullet weight does hit a little bit lower. As most defensive scenarios will be closer than 15 yards, this divergence of POI to POA is probably moot. As the 5 sets of controlled pairs show, the ammunition is easy to handle from the Hi Power. 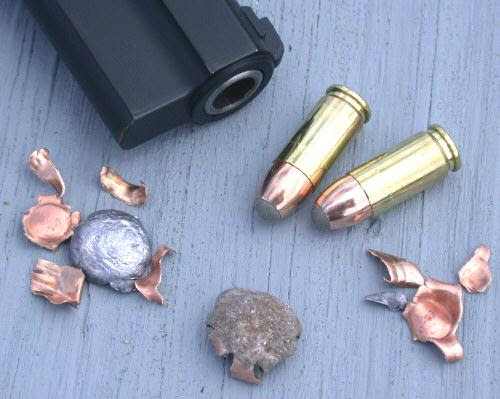 When fired into water, the PowRball shed its jacket every time. Water will make this happen more than gelatin as the fluid more easily gets between the lead bullet and the jacket. I recovered the expanded PowRball bullet and jacket fragments shown on the left side of the picture and those on the right from another shot. The bullet was not recovered as it completely penetrated the last jug of water! The expanded PowRball in the middle was recovered after "scientific mud expansion" testing. The recovered bullet and fragments on the left weighed 94.5-grains. The expanded bullet measured 0.59 X 0.64." Believe it or not, the PowRball recovered from the "scientific mud" weighed about 75-grains even with the dirt particles on it.

Though not "bad," the felt recoil on the 100-grain PowRball was "sharper" than that of the 125-grain Corbon +P JHP. To me, the felt recoil of the PowRball and the 115-grain JHP are about the same. This is not surprising as the velocities are very similar.

From the same Mk III

Folks who do the serious gelatin testing report that the PowRball averages about 12" penetration in 10% ballistic gelatin and does so consistently, regardless of barriers. 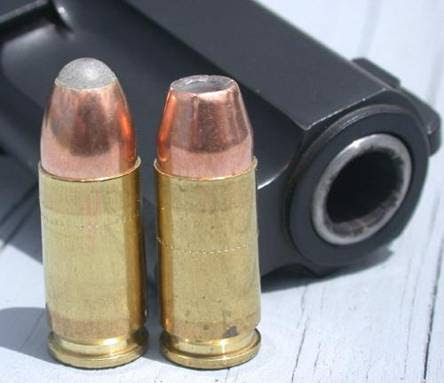 Though the Mk III in the background reliably feeds about any JHP I've tried, the PowRball has both a rounded ogive and LOA that mimics FMJ. Shown with a Corbon 125-grain JHP, most would agree that the PowR ball would be more likely to feed well in a wider number of 9mm pistols. 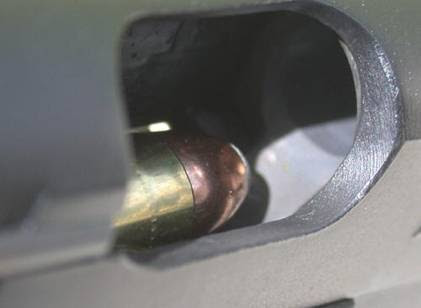 With its "ball" profile, this PowRball should have no trouble in negotiating this Hi Power's feed ramp. For self-defense, a handgun's reliability is paramount. You get it with the PowRball and a cartridge capable of being put exactly where you want it should the rare need for a very precise "rescue shot" be necessary.

I was favorably impressed with the PowRball for a personal protection round for the private citizen. I would do some testing before using it myself, but I believe that it would make a potent 9mm load. In "scientific" terms, it has quite a bit of "whammy" and with decent placement, should "stop" a felon about as quickly as any commonly used defensive round and perhaps, quicker.

The 9mm 100-grain PowRball grouped well and was more consistent shot to shot than their .45 ACP, 165-grain PowRball that I tested several months ago. Both rounds feed reliably. 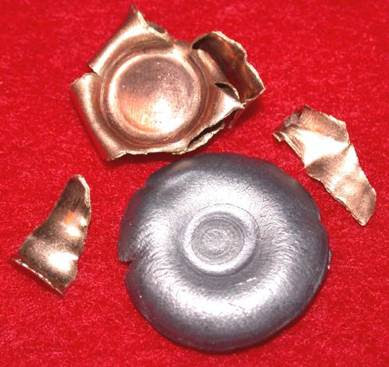 This 165-grain Corbon PowRball expanded well in water testing and was both reliable and accurate, but did not prove as consistent in standard deviation as did the 9mm version. The .45 ACP PowRball was the first caliber Corbon released this design in. More calibers are to follow.

For those concerned about feed reliability with a defensive load as well as over-penetration, the PowRball is a very viable choice. Both the 9mm and .45 ACP versions penetrate approximately 12" of ballistic gelatin and should remain inside the average human torso assuming a solid hit. Both "passed" the dreaded "4 Layers of Denim" testing routinely done by those seriously studying terminal ballistics and bullet performance.

I think it will be a winner and might make a viable choice for those wanting the same performance under a wide number of conditions, but who are unable to obtain or use several of the law enforcement only loads.

Posted by Teddy Jacobson at 9:54 AM

View the article BRAD GIORDANI THE CREATOR OF MILITEC-1

View HOW DID A LUMBERJACK INVENT MILITEC-1 ?

MESSAGES FROM OUR TROOPS

RESULTS FROM TESTING OF MILITEC-l WEAPONS METAL CONDITIONER
May 16, 1996

A TEST AND EVALUATION REPORT BY HUGH G.M. LOVE AND DON SMART

By Russ Chastain. MILITEC-1 is Good Stuff
...The claim is that this stuff soaks into the pores of the metal, and from the way it stays on the gun, I believe it...

MILITEC-1's USE IN BLACK POWDER

MILITEC AWARDED FOR SERVICE TO MILITARY

Teddy Jacobson, Pistolsmith, Actions by "T" - I have been perfecting my handgun action work for the past 25 years. Very few people, if any, know as much about trigger work as I do. In order to have a glass smooth action, using a superior lubrication is essential...

Captain David G. Ruiter, U.S. Army - I was introduced to MILITEC-1 almost two years ago when in Command of a U.S. Army Basic Combat Training unit at Fort Sill, OK. My Battery began using it there with excellent results.

Lieutenant Joel Darby - I wish to thank you for the samples of "MILITEC l". My organization does not provide endorsements for products and equipment that we use, but the positive experience I have enjoyed with "MILITEC l"...

M/Sgt. Pat Cronin, MHP Pistol Team - During the spring of 1991 we were introduced to MILITEC-1 at the U.S. Secret Service Pistol Match in Beltsville, Maryland...

JACK N. PRESTON, Rangemaster - I first learned of MILITEC when it was introduced to me by the Drug Enforcement Administration at the Pasadena Police Range...

Terry Anderson, Advisory Council, U.S. Shooting Team - Thank you for the samples of MILITEC. All the test samples have been used and the results are, I am pleased to annouce, extremely good...

MILITEC-1 survived the trek to The North Pole

Our first Free Samples were introduced
at the Modern Day Marine Corps Expo in September 1988.

Posted by Teddy Jacobson at 9:42 AM