I do not recommend the purchase of any SOG knife, this is my personal opinion only as I have encountered hostility and misery with their warranty dept. The woman there is very nasty and there are far better choices in the purchase of a knife such as COLD STEEL and BENCHMADE etc, etc, etc. There is no one to talk to that seems to want to help some one like me that runs into defective SOG knives. AT THIS TIME I HONESTLY FEEL THAT THE PURCHASE OF A SOG PRODUCT IS A TOTAL WASTE OF YOUR HARD EARNED MONEY. THERE ARE SO MANY BETTER KNIVES TO CHOOSE FROM MADE BY OTHER COMPANIES.

We are now accepting names of people that want to be in our next PROJECT STREET GUN CLASS WHICH IS NUMBER SIX. This is not a formal class, we will provide everything you need to do the work your self at your home and at your convenience. I would like to maintain about 15 people for this new project.

Please go to my website www.actionsbyt.com
and email me and we can discuss it in detail. I prefer to use the basic SA mil-spec 1911-a1 parkerized pistol. I do not want to use the stainless steel version.

DISCLAIMER : I DO NOT RECOMMEND THE CURRENT PRODUCTION PRODUCTS OF SMITH AND WESSON HANDGUNS. THIS IS MY PERSONAL OPINION ONLY WHICH IS BASED ON MANY YEARS OF HANDS ON EXPERIENCE. THEY SEEM TO BE VERY INTERESTED IN SELLING YOU CHEAP CHINESE KNIVES AND COFFEE MUGS AND CLOTHING. MY OPINION ONLY...

Smith & Wesson NASDAQ: SWHC are the largest manufacturers of handguns in the United States. Their corporate headquarters are in Springfield, Massachusetts. Smith & Wesson have a reputation for the many types of ammunition they have introduced over the years and for their revolver expertise.

In 1852 partners Horace Smith and Daniel B. Wesson formed a company to produce a lever-action pistol nicknamed "The Volcanic". The company became known as the "Volcanic Repeating Arms Company", and due to financial difficulties came into the majority ownership of investor Oliver Winchester.

In 1856 the partners left the Volcanic Company to begin a new company and to manufacture a newly-designed revolver-and-cartridge combination. The timing of the founding of this new company proved quite opportune for the partners, as the onset of the American Civil War five years later produced a great demand for Smith & Wesson's products.

In 1964 the company passed from Wesson family control, and subsequently a number of conglomerates took control of it.

In March 2000 Smith & Wesson signed an agreement with the Clinton administration in order to avoid lawsuits. The company agreed to a number of safety and design standards, as well as limits on the sale and distribution of their products. Gun clubs and gun rights groups responded to this agreement almost instantly by initiating large-scale boycotts of Smith & Wesson by refusing to buy their new products and flooding the firearms market with used S&W guns, cutting into their market share. [1][2][3]

On May 11, 2001, Saf-T-Hammer Corporation acquired Smith & Wesson Corp. from Tomkins PLC for US$15 million, a fraction of the US$112 million originally paid by Tomkins. Saf-T-Hammer also assumed US$30 million in debt, bringing the total purchase price to US$45 million. [4] [5] Saf-T-Hammer, a manufacturer of gun locks and other firearms safety products, purchased S&W with the intention of incorporating its line of security products into all Smith & Wesson firearms in compliance with the 2000 Clinton administration agreement.

The acquisition of Smith & Wesson was chiefly brokered by Saf-T-Hammer President Bob Scott, who left S&W in 1999 due to disagreement with Tomkins’ policies. After the purchase Scott became the President of Smith & Wesson to guide the 157-year-old company back to its former standing in the market.

On February 15, 2002 the name of the newly formed entity was changed to Smith & Wesson Holding Corporation.

Smith & Wesson introduced the Sigma series of recoil-operated, locked-breech semi-auto pistols in 1994 with the Sigma 40, followed by the Sigma 9. Sigma pistols bore so much similarity to Glock's that users could reportedly interchange many parts between Glock and Sigma models. The similarities were so great that many pundits referred to the Sigma series as 'Swocks', a playful contraction of S&W and Glock. As a result, Glock initiated a patent infringement lawsuit against Smith & Wesson, which paid an undisclosed sum (the amount of three million dollars has been theorized) to Glock for infringement of their patents. S&W thereupon received the rights to continue the production of Sigma line, but they were forced to redesign the pistol's trigger mechanism so that it did not infringe upon Glock's patents.

The gun frame is manufactured from polymer, while the slide and barrel use either stainless steel or carbon steel. In 1999 S&W updated the Sigma by shortening the barrel (from 4-1/2 to 4 inches) and added an integral accessory rail for lights and laser target designators.

S&W also reached an agreement with Walther to produce variations of the P99 line of pistols. Branded as the SW99, the pistol is available in several calibers, including 9mm, .40 S&W, and .45 ACP, and in both full size and compact variations. Under the terms of the agreement, Walther produced the receivers, and Smith and Wesson produced the slide and barrel. The pistol has several cosmetic differences from the original Walther design, and strongly resembles a hybrid between the P99 and the Sigma series mentioned above finale.

In 2005, Smith & Wesson debuted a new polymer-frame pistol intended for the law enforcement market. Dubbed the M&P (standing for Military and Police), its name was meant to evoke S&W's history as the firearm of choice for law enforcement agencies through its previous lineup of M&P revolvers. Though similar in appearance to the still-produced Sigma lineup, the M&P is a new design. Many of the ergonomic study elements that had been incorporated into the Sigma and the SW99 were brought over to the M&P. The improved trigger weight and feel, and unique takedown method (not requiring a dry pull of the trigger) were meant to set the M&P apart from both the Sigma and the popular Glock pistols.

Smith & Wesson produced the Model 916,916T,916A 12 gauge shotguns which were plagued by poor quality control and had cascading minor issues in the field, prompting them to move on to the model 1000 and 3000 shotguns. Smith & Wesson exited the shotgun market in the early 70's to return to their "core" market of handguns.

In November 2006 S&W announced that it would reenter the shotgun market with two new lines of shotguns, the Elite series and the 1000 series, to be unveiled at the 2007 SHOT Show. Along with the new shotguns S&W debuted the Heirloom Warranty program, a first of its kind in the firearms industry. The warranty provides both the original buyer and the buyer's chosen heir with a lifetime warranty on all Elite Series shotguns. [7]

In 2003, Smith & Wesson introduced their variation of the classic M1911 .45 ACP semi-automatic handgun, the SW1911. This firearm retains the M1911's well known dimensions, operation, and feel, while adding a variety of modern touches. Updates to the design include serration at the front of the slide for easier operation and disassembly, a high "beaver-tail" grip safety, external extractor, lighter weight hammer, and trigger, as well as updated internal safeties to prevent misfires if dropped. S&W 1911s are available with black finished carbon steel slides and frames or bead blasted stainless slides and frames. They are also available with aluminum frames alloyed with Scandium in either natural or black finishes. These updates have resulted in a firearm that is true to the M1911 design, with additions that would normally be considered "custom", with a price similar to entry-level M1911 designs from other manufacturers.

All Smith & Wesson firearms have been equipped with an internal locking mechanism since the acquisition by Saf-T-Hammer. The mechanism itself is a relatively unobtrusive lock which, when activated with a special key, renders the firearm inoperable. While the lock could simply not be used at all, some gun owners refuse to buy "post-lock" guns, fearing the extra part might fail when they need it most. Smith & Wesson have repeatedly stated that the locking mechanism does not affect reliability. More, however, dislike it as it reeks of government interference, and is symbolic one of the country's oldest firearms makers "giving in".

In addition to firearms, Smith & Wesson has also licensed its name to a line of bicycles designed by and for police. These bicycles have features such as higher handlebars and silent hubs. [8] [9]

Smith & Wesson Flashlights are also now available to the general public. They are designed and produced by PowerTech, Inc. in Collierville, Tennessee with Smith & Wesson's approval on every product.

In November 2006, Smith & Wesson announced that it would begin manufacture of shotguns for the 2007 model season, a market it has not been a part of since the 1970s [12] 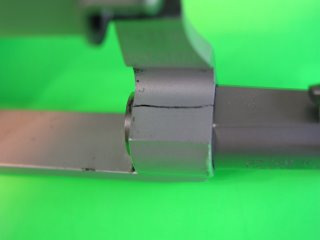 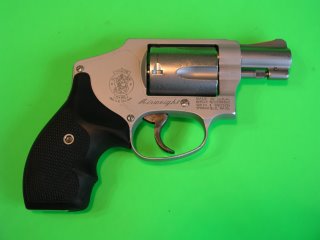 Posted by Teddy Jacobson at 9:08 AM