The following is my opinion: IF YOU BUY A KEL-TEC YOU CAN NOT GO WRONG BECAUSE ITS CHEAP AND LIGHT WEIGHT AND IT FIRES FROM A LOCKED BREECH AND HAS A GOOD EXTRACTOR AND AN EJECTOR AND USES SPRINGS MADE OF CHROME SILICON.

The following is my opinion: IF YOU BUY A NAA GUARDIAN PISTOL DEPENDING ON WHICH CALIBER, IT IS NOT ONLY HEAVY BUT IT OPERATES ON A DIRECT BLOW BACK SYSTEM AND HAS A POORLY DESIGNED BREECH FACE. IT HAS NO EJECTOR, IT HAS A FAIR EXTRACTOR AT BEST. I WOULD NOT RECOMMEND THIS PISTOL UNTIL THEY MAKE THE NECESSARY CORRECTIONS. I HAVE BEEN ABLE TO MAKE THEM WORK FLAWLESSLY.

The following is my opinion: IF YOU BUY A SEECAMP, IT IS NICE ON THE OUT SIDE BUT CRUDE IN MY OPINION ON THE INSIDE. I HAVE NOT SEEN ANY OF THE NEW ONES. THEY HAVE A FAIR EXTRACTOR AND THEY HAVE NO EJECTOR ON THE ONES I HAVE SEEN. WOULD I BUY ONE ?? "NO" .....THIS IS A DIRECT BLOW BACK OPERATION AND LIKE THE GUARDIAN YOU FEEL THE RECOIL MORE AND IF YOU LIMP WRIST IT YOU MAY CAUSE A JAM.

CONCLUSION: I WOULD AT THIS TIME BUY THE NEW RUGER "LCP" JUST TO TRY ONE AND IF I LIKED IT I WOULD CARRY IT WITH CORBON POWER BALL AMMUNITION IN 380 acp WHICH IS A 70 GRAIN BULLET.
I WOULD ALSO NOT HESITATE TO BUY THE KEL-TEC PISTOL.

AS FOR WOMEN I THINK THE BERETTA MODEL 21 BOBCAT IN 22 LONG RIFLE CALIBER IS WORTH LOOKING AT AS AMMUNITION IS STILL AVAILABLE AT A DECENT PRICE AND WITH THE FLIP UP BARREL YOU WILL NEVER HAVE TO WORRY ABOUT PULLING THE SLIDE BACK. DO NOT FOOL YOUR SELF MANY PEOPLE HAVE BEEN AWARDED A TOE TAG BECAUSE OF RECEIVING A 22 LONG RIFLE BULLET IN A VITAL AREA.

Tom DeLay: John McCain Has Done the Most to Hurt the GOP

I JUST WANTED TO BRING YOU UP TO DATE ON 1911 MAGAZINES. I HAVE FOUND THAT THERE IS NO BETTER MAGAZINE FOR YOU TO PURCHASE THAN THE "COBRA" MAGAZINE MADE BY VIRGIL TRIPP OF www.trippresearch.com

They are being improved continually and I personally know VIRGIL and he will stop at nothing in order to give you the very best product money can buy. Its all about your life and of total reliability. Virgil and I are on the very same page.

I do not buy cheap anything, especially magazines. If I can not afford the very best I will not personally buy anything. Even the knife I carry retails for about five hundred dollars. When it comes to compromise I will not.

On my carry GLOCKS, I insist on having a matte chrome plating applied to Slide on the ones that I carry and Virgil Tripp has done mine with perfection. I have many guns and slides hard chromed at TRIPP RESEARCH AND HES NEVER LET ME DOWN. His turn around is outstanding.

A little Jewish boy in the doomed Warsaw ghetto

There are many wounded students, several in critical or serious condition. Witnesses described one or more gunmen who fired in all directions as well as a suicide killer wearing a bomb vest. They stormed two parts of the four-storey building in which hundreds of seminarists study. In an exchange of fire which followed the attack Thursday night, March 6, one or two terrorists were shot dead. Heavy police and counter-terror forces are scouring the city in search of the terrorists’ confederates. Special military forces joined the police in the building.

Israel has been placed on national terror alert.

There has never been a time in human history as dangerous as the one we now live. For those who don’t believe God is bringing His judgment to the entire world I offer one picture that may be the most severe warning we could receive from God, for there is no place on earth that He is more concerned over than the . For judgment always begins in the house of God and if there is one place on earth that is said to be His House and where His Spirit dwells it is the Temple Mount (Psalm 132:13-14 and 15:1) just to mention a couple references in His Holy Word. We know that by One Spirit are we all baptized into one body that the Ruach Ha Kodesh (Holy Spirit) dwells in us and us in Him) but my brothers and sisters when God clearly says His Spirit dwells in a place for ever we need to believe it. Connie and I have been going to the and the Western Wall for over 25 years on a regular basis and I can tell you as a Jew who knows Yeshua as Messiah that His Spirit does dwell in this place.

This past Friday we had the second earthquake in one week it was 5.3 that shook much of . God is saying first to the Jew you are about to feel the full blunt of my anger. The was shaken to the core and an opening appeared on the . A hole measuring over 6-feet long, 3-feet deep and 5-feet wide, many of the buildings in the Old city suffered damaged.

At a time when is being sold down the river to the enemies of God. At a time when is about to realize its nuclear ambitions, too hold the world at bay while they try to destroy . At a time when Hamas and Hezbollah backed by and are making plans to launch another war that they believe will destroy or weaken to the point that and the rest the Islamic Arab world can finish off.

Jordanian newspaper Al-Arab Al-Youm reported today, through sources that an American message leaked by Egypt to Syria shows that the United States is ready to launch a broad military operation against Syria if it insists on its position on the Lebanese crisis and this is the real reason behind the deployment of “USS Cole” in front of the Syrian - Lebanese waters

The source said that the official announced reason of Condoleezza Rice’s visit to Egypt is to push the Palestinian - Israeli peace process forward but the real reason is to explain the American military actions and the presence of the American ships to the Egyptian leadership.

This is reported today “US waived congressional restriction on Egypt aid” … which says it all. 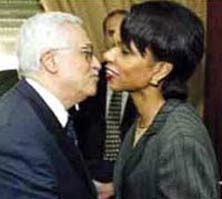 The Israel Hammer jeep force was greeted with fierce anti-tank and heavy machine gun fire. Tank and helicopter reinforcements were brought in. The Palestinians report three dead in the ongoing battle. They fired some 10 missiles into Israel during the day, one of which leveled a Sderot home. As the battle raged, the Palestinians renewed their missile fire on Sderot. The Israeli force later withdrew from the Gaza Strip.

Our Palestinian sources report the Hamas provocation was its rejoinder to the proposal put by visiting US secretary of state Condoleezza Rice Tuesday in Cairo and Ramallah for the Gaza crossings to be re-opened in exchange for Hamas discontinuing missile and rocket fire on Israeli civilians.

This proposal was deemed unrealistic in Jerusalem, since no one had asked the Hamas rulers of the Gaza Strip. The Islamist group was also telling Palestinian Authority chairman Mahmoud Abbas that, when he demanded a comprehensive truce in his talks with Rice Tuesday, he no longer spoke for the Gaza Strip. Former IDF chief of General Staff Lt.-Gen. Amnon Lipkin-Shahak said Thursday that the army should have targeted Hamas leaders long ago in retaliation for the rocket attacks on southern Israel.

"I think what they have avoided doing in recent months, hitting Hamas headquarters and Hamas leaders, it seems they are beginning to do now. I believe it would have been the correct course of action long ago," he told Army Radio.

CAUTION: PICTURES SHOWN ARE THE FOUNDER OF HAMAS THAT WAS HIT WITH AN ISRAELI MISSLE. VIEW WITH CAUTION. PLEASE DO NOT DISTURB - HE IS NOW WITH HIS 72 VIRGINS... IN PARADISE OF COURSE...

GAZA - JULY 31: The paraplegic founder of Hamas, Sheikh Ahmed Yassin (C) speaks to the news media at a news conference in his home July 31, 2002 in Gaza. A military wing of Hamas, the Izz el-Deen al-Qassam, claimed an earlier bomb blast at Hebrew University is in retaliation for the killing of its leader Salah Shehada from an Israeli air strike last week. Israeli authorities said that a planted bomb exploded in a crowded cafeteria killing at least six people and wounding 80 others. (Photo by Abid Katib/Getty Images) (#119582 Posted by Teddy Jacobson at 8:25 AM