I DO NOT RECOMMEND THE USE OF MILT SPARKS LEATHER MAGAZINE HOLDERS FOR A HANDGUN. I BOUGHT ONE A LONG TIME AGO AND I HAVE HAD NUMEROUS CONVERSATIONS WITH THEM, ALTHOUGH THEY WERE VERY NICE ON THE PHONE I GOT NO WHERE. THE ACID IN THE LEATHER DESTROYS THE GOLDEN SABER CARTRIDGES THAT I CARRY FOR MY GLOCK 19.

DO NOT WASTE YOUR MONEY BUYING THIS EXPENSIVE PRODUCT. I WOULD RECOMMEND THAT YOU BUY A BALLISTIC NYLON MAGAZINE HOLDER WITH A VELCRO FLAP AT HALF THE PRICE EITHER MADE BY BIANCHI OR UNCLE MIKES, ETC, ETC.

I HAVE HAD NO TROUBLE WITH MILT SPARKS HOLSTERS BUT NOW I AM HAVING SECOND THOUGHTS BECAUSE THEY HAVE MADE NO ATTEMPT TO RECTIFY THIS SITUATION BECAUSE THEY DO NOT KNOW HOW, AND DO NOT SEEM TO CARE.

DO NOT BUY MILT SPARKS EXPENSIVE LEATHER SPARE MAGAZINE HOLDERS. ITS JUST NOT WORTH THE AGGRAVATION.

MANY NEW 1911 PISTOLS USE A 9mm or 38 SUPER FIRING PIN. I PERSONALLY DO NOT LIKE THIS IDEA. AFTER MARKET FIRING PINS VARY IN DIMENSIONS, I HAVE FOUND THAT THE ONES MANUFACTURED BY "STI" ARE AS GOOD AS ANY OUT THERE.

I CARRY MY GLOCK ON THE DRY SIDE BECAUSE I HAVE A MOLY COATED BARREL. I USE MILITEC LUBE WHERE THE FRICTION POINTS ARE BUT NOTHING BEYOND THAT. I NEVER PUT ANY LUBRICATION ON THE BREECH FACE OR THE EXTRACTOR. KEEP THINGS VERY SIMPLE AND YOU MUST KEEP YOUR WEAPONS VERY CLEAN. I NOW HAVE SWITCHED OVER TO THE NEW BIRCHWOOD CASEY SYNTHETIC AEROSOL CLEANER IN THE 13 OZ. SIZE CAN.

IN A MESSAGE TO ANN, I COULD NOT ANSWER YOU BECAUSE MY EMAIL TO YOU CAME BACK. IN MY SELECTION OF 380 acp AMMO FOR CARRY ONLY I WOULD TRY AND GET SOME CORBON POWER BALL.
THIS IS EXPENSIVE AND NOT TO BE USED AS A STEADY DIET. MY FAVORITE AMMO IS ALWAYS FEDERAL AND I LIKE HORNADY AND SPEER. MOST ALL AMERICAN MANUFACTURED AMMO IS GOOD.

What about Hornady XTP Handgun Ammunition? Hornady "eXtreme Terminal Performance" JHP's have been around for quite a while and are available in most of the more commonly used handgun calibers. They are not usually as aggressive in expansion characteristics as are some other bullets, most notably, Sierra. The XTP is designed to expand about 1.5 times its original diameter and I believe it was the first JHP that "passed" the FBI's requirement of 12" penetration in 10% ballistic gelatin.

Some folks in the study of terminal ballistics and "stopping power" rate bullets that expand to larger diameter and perhaps fragment as being better than those that don't. On the other side of that issue are the researchers who like it's penetration characteristics, but find that it doesn't always expand after passing through the 4-layers of denim test. Thus, the bullet and loaded Hornady ammunition is frequently not on the top of many people's "must buy" ammunition list for protection.

I've never shot it through denim and have used XTP bullets in handloads, having shot relatively little of the factory rounds. The XTP's are popular with handgun hunters and I'm no exception. I've used them primarily in 9mm and .45 ACP, but have also had good luck with them in .44 Special and .45 Colt.

The only Hornady factory XTP load that I've fired which seems to expand a bit more aggressively has been in 9x18mm Makarov.

The thing I've noticed with all Hornady XTP bullets, regardless of the caliber, is that they are very often THE bullets for accuracy. If I'm trying to work up an accurate load that is full power as well, I'll frequently start and usually stop with the XTP. In semiautomatic pistols, I've never had any problems with them being recalcitrant in feeding. In 9mm, Hornady's 124-grain XTP expanded in the same ol' "caliber and a half" fashion. The 4 layers of denim tests limit this load's expansion, but I frankly think it's loaded a little bit light from the factory. This is the wound tract left by a 9mm Hornady 124-gr XTP on the inside of a whitetail's shoulder after impacting at about 1250 ft/sec. I normally do NOT see wound channels of this size. No bone was hit and the bullet completely passed through the 130-lb deer. I do not understand the size of this wound, but it is what it is and just shows that every gunshot wound is different. The deer collapsed instantly and surprisingly was the only "instant handgun stop" made last year. This 124-grain XTP was recovered from a javelina. Though not as "smooth," it does resemble the characteristics exhibited by the one fired into water. This one was fired over 6.0 grains of Unique and penetrated an estimated 14" or so in the javelina. Obviously, it "worked." I've shot several with this load and have zero complaints with regard to "effectiveness." It's also very accurate. It appears that in .45 ACP caliber at least, Hornady is quietly making subtle changes to their XTP bullets. I have no idea if this is to increase their expansion characteristics after passing various barriers used for testing. Though similar, the hollow point in the 230-grain .45 ACP XTP on the right is deeper than the one on the left.

The thing I continue to like lots with respect to the XTP is their accuracy. This group was fired using factory Hornady 9 x 18mm Makarov 95-gr XTP's. Distance was 10 yards and the firearm was a Makarov pistol. Several years ago, Corbon used to load the XTP in their 124-grain 9mm +P loads. They then went with the Gold Dot from Speer, which is shown on the left. From a HK P-7, other than the one out of the group due to me, the 124-grain XTP grouped very well. Accuracy has not been a problem from the Browning Mk III with the XTP, either. The group fired using Corbon ammunition is in the center of the picture. The bullet was Hornady's 180-grain XTP. In .45 ACP, Hornady's 200-grain XTP has provided very fine groups. One fired at 15 yards is shown in the upper right of this picture. It was fired from a Dan Wesson Patriot.

In short, I've been quite satisfied with Hornady's XTP bullet and suggest giving it a try, either as loaded ammunition or as a component if you reload.

Posted by Teddy Jacobson at 7:56 AM 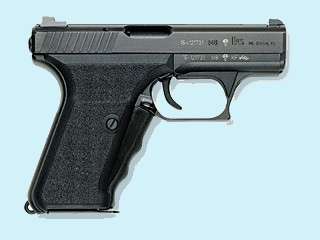 BUY GREEN GAS CANS - DO NOT BUY RED - PEOPLE HAVE ALMOST BEEN KILLED DURING KATRINA OVER A RED GAS CAN.

OD Green 20L Petrol Military Fuel Can
The Scepter MIL spec petrol cans are simply the safest heavy duty fuel can on the market today. These light weight fuel cans are designed to safely and securely transport auxiliary fuel. These cans meet DOT regulations as well as exceeding the United Nations Transportation of Dangerous Goods Model Regulations, the only fuel can on the market to meet this stringent guidelines.

These cans are made out of injection molded polyethylene. This plastic derivitive ensures that the can will never rust or dent and is permanently colored. The OD green can features an olive drab green coloration. Each can is clearly marked "fuel" on the side and features a red color-coded check strap for the lid, with a large embossed "P" indicating its designation as a Petrol fuel container. This check strip provides easy fuel-type identification as well as DOT compliance.

I HAVE DECIDED TO SHOW YOU SOME INTERNAL MIM PARTS WHICH ARE METAL INJECTION MOLDED PARTS (POWDERED STEEL) AND ARE BEING USED IN MOST CURRENTLY MANUFACTURED AMERICAN MADE HANDGUNS.

I WANT YOU TO STUDY THIS PICTURE OF PARTS AND SEE IF ANY OF THEM LOOK FAMILIAR TO YOU. YOU BE THE JUDGE AND DECIDE IF THE AMERICAN HANDGUN YOU ARE NOW PURCHASING HAS REALLY BEEN 100% MADE IN AMERICA.

OR ARE THESE HANDGUN MANUFACTURERS PLAYING ALL OF US LIKE A FIDDLE AND WE ARE NOW GLOBALIZED EVEN WITH THE INTERNAL PARTS OF OUR FAVORITE AMERICAN MADE HANDGUN.

THE AMERICAN DREAM OF TRUE QUALITY IS OVER. MOST OF THESE COMPANIES ARE RUN BY BEAN COUNTERS AND COULD CARE LESS ABOUT ANYTHING BUT PROFIT MARGINS.


Indo-US MIM Tec Pvt. Ltd. has been in operation for five years in the field of Metal Injection Molding. It is a group company of Shiva Technologies Inc., USA, the global leader in Ultra Trace Element Analysis of materials. Shiva Laboratories are located in USA, France and India.

We have developed over 600 varieties of components since inception. Our capability to offer the world's best technology at competitive prices provides a significant advantage to our customers all over the world.

MIM components are produced at our 250,000 sq.ft, state-of-the-art facility in Bangalore, India, with engineers trained in USA. Indo-US MIM Tec has a branch office and warehouse in the US.

Please refresh this page if you are having playback problems.

Posted by Teddy Jacobson at 9:00 AM

US seeks to buy ammunition from Taiwan as stocks run low

The United States is planning to buy hundreds of millions of bullets from Taiwan in the first such deal as its supplies are running low after wars in Afghanistan and Iraq, a report said Thursday. Citing Taiwanese military sources, the United Evening News said Washington had made the request to acquire some 300 million 5.56 NATO ammunition for rifles for an estimated two billion Taiwan dollars (62.5 million US).

The deal was yet to be finalized pending price negotiations, it said.

An unnamed general quoted by the paper said it would be the first time for Washington, Taiwan's leading arms supplier, to acquire arms from the island.

In line with its usual practice, Taiwan's defense ministry declined to comment on the report.

Taiwan produces some 400 million such 5.56 NATO rounds annually, according to the paper. It added most rifle ammunition is manufactured by an arsenal in southern Kaohsiung which has storage problems due to declining demand in the absence of any military conflict across the Taiwan Strait.

Washington Wednesday agreed to sell air-to-ground Hellfire missiles worth 50 million US dollars to Taiwan to help the island defend itself against threats from rival China.

"The US Army has executed a letter of agreement with Taiwan, setting the stage for the sale of more than 400 AGM-114M blast-fragmentation Hellfire rounds under a foreign military sales contract," US defense giant Lockheed Martin Corporation said.

It would take the company about six months to make the Hellfire missiles ordered by Taiwan.

The 5.56 mm bullets are mainly used to replenish supplies which have run low after wars in Afghanistan and Iraq, the Taipei-based China Times reported, citing a military source.

Taiwan's defence ministry last year beat off competition from the likes of Singapore and South Korea to win the five-year contract from a U.S. military subcontractor, it was reported.

The US is the leading arms supplier to Taiwan -- something China objects to -- with Beijing regarding the island as part of its territory awaiting reunification, by force if necessary.

Taiwan has been seeking more advanced weaponry amid China's repeated threats to invade.

Tensions between Taipei and Beijing escalated since the independence leaning leader was elected president in 2000. He was narrowly re-elected in 2004.

Posted by Teddy Jacobson at 9:09 AM